The markets went back to normal this week. That is to say, they went to running on bad news, and falling on good news.

The jobs market seems to be in a better-than-expected shape (more jobs, less unemployment), which might be suggesting that Powell & the gang have a shot at taming inflation without crashing the economy. Aka: the mainstream media is saying they’ll manage the soft(ish) landing, even though the US already had two consecutive quarters of GDP declines.

That belief resulted in higher prices for the risk-on assets, like broad market equities, while safe-haven assets like gold remained flat, and silver even closed the week lower.

What are experts saying about commodities?

What happened in commodities this week?

Commodities had a mixed week, starting off strongly and then falling into the jobs report on Friday, as the US dollar showed strenght against its equally worthless counterparts.

What moved commodities this week?

If gold is an inflation hedge, how can it be down in the face of the mutli-decade highs that we’re seeing in inflation? Lobo Tiggre says that gold isn’t down, based on this chart:

Based on that knowledge and the chart above, Lobo told me that “there is nothing alarming about gold’s short-term performance”.

He also reminded me to “keep the big picture in mind” when looking at gold and its place in ones portfolio. Gold bullion is not a specualtion, it’s insurance.

To add to that, Lobo is happy with the price performance of gold because even in the face of a “strong” US dollar, and the increasing chances for a heavier rate hike in the fall, gold still managed to close the week slightly higher.

Even though the jobs report on Friday sent copper futures prices 2% higher, that wasn’t enough to help the metal that shares a color with my hair close the week in the green.

Until the worries about a recession come down, industrial metals remain high risk, according to Lobo. He’s still not buying copper nor copper stocks.

Earlier this week, Brian Gitt Tweeted this chart, saying that

Both Lobo and I remain bullish on copper but have only risked money on it, that we do not anticipating to need in the next five years.

Uranium had a particularly good week on the side of news for the future of the sector, while the prices of the uranium equities declined. This is what Rick Rule would call an opportunity, and so did Justin Huhn, during this week’s interview.

An important development that I caught wind of this week was a screenshot shared by Harry Chris on Twitter.

Economic Calendar for Next Week

Below, you will find an overview of economic news and data expected next week. I only watch the ones that I deem important for my gold-silver-copper-uranium-focused portfolio. Did I miss something? Please do let me know.

Next week is mostly about inflation. EU & US inflation data will be published throughout the week. 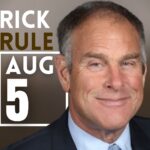