Last week, I witnessed the biggest one-day stock price increase that I have seen so far, in a high-risk nano-cap gold stock called “American Eagle Gold”. I reached out to their team, and they agreed on an interview.

American Eagle DID NOT pay for the production of this interview. No questions changed hands before the interview. The interviewer DOES NOT have any positions in this company.

This is an extremely high-risk speculation, at best. Beware of that fact.

This is the interview in which I tried to figure out why this gold stock went up +500% in 1 day, what the company behind it does and what it plans on doing in the future.

American Eagle started off with a close-ology asset in Nevada, in which they drilled 1 hole before realizing it wouldn’t work out. The team then found a property in BC, Canada, and started drilling it within 6 months of them leaving Nevada. The new property is called “NAK”, and is located in the Babine Copper-Gold Porphyry district in central British Columbia, some 85 kilometers North-East from a small town called Smithers, BC.

The property is expected (hoped) to have a copper-gold porphyry open at depth, beyond what was previously proven. NAK is defined by a geophysical signature analogous to Newcrest’s Red Chris Mine and Newmont’s Saddle project located in Northwest BC.

This company is not the first company to drill the property. According to their MD&A, 105 diamond holes were completed for 18,475m, averaging 175m in length and to an average vertical depth of 150m.

Here’s a brief history of the NAK property:

• 2021: NAK Mining digitized, analyzed, reinterpreted and modelled all historical data for the first time on this property. Independent geophysical and geochemical analysis was completed for historical data. The company recently applied for a five-year, multi-hole drill permit.

Anthony Moreau, American Eagle’s CEO, told me that only four holes were drilled below 300m vertically and failed to test the top of the coincident magnetic and ZTEM anomaly, which starts at a depth of 500-600m. This is the main thesis behind this company. They want to drill up to a depth of roughly 1000m and find something between the previously drilled holes and that depth. So far, they’ve drilled 7 holes, and only reported on one. That one hole contained 851.28 m of 0.33% copper equivalent (“CuEq”), including 126 m of 1.02% CuEq from surface, and ended in mineralization. This made this small gold stock go up +500% in 1 day. However, the bulk of the hole, beyond historic drilling, did not contain exciting grades. This will have to change with future holes.

Important Warning – Your Capital is at Risk!

Antonio Atanasov and Scott Berdahl are not your investment advisors. They likely own shares of companies mentioned in this publication. Always assume them biased. The information provided in this publication – and all other publications by Resource Talks – is impersonal in nature and meant for general information purposes only. Before taking any action on any investment, it is imperative that you consult with multiple licensed, experienced, and qualified investment advisors. Get numerous opinions before taking your own decision in the end.

The minimum risk on any investment mentioned in this publication is 100% loss of capital.

Readers are cautioned that this presentation likely contains forward-looking statements about expected future events and the financial and operating performance of any companies potentially discussed herein. Reality often varies from people’s expectations. Mining, exploration, and development companies are known for over-promising and under-delivering. If such a company (or a representative thereof) was speaking in here, beware of what they’re saying. Don’t trust them. Double-check what they’re saying by reading the MD&A that is available for free on www.Sedar.com. Readers/viewers/listeners are also encouraged to read the Cautionary Note on Forward-Looking Information and to consult the Company’s Annual Information Form, which is also available on www.sedar.com. Reading the full disclaimer on the disclaimer page on this website is mandatory before consuming any of this content. 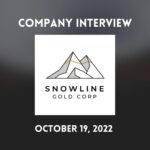