Finally, Brussels seems to have come to its long-lost senses, and it has labeled nuclear energy and natural gas as sustainable, in an effort to reach climate neutrality by 2050.

Given that Spain, Austria, and Luxembourg threw a big hissy fit when Brussels told them they prefer listening to science instead of socialism, some European member states might decide to take legal actions against Brussels for this decision.

Although, clearly, this is a good decision, member states will get some time to review it, and raise objections where they find fit. To get nuclear & gas out of the taxonomy, though, 20 out of 27 member states (+65%) will have to object against it, and let’s hope not that many countries have lost their minds. Especially provided that most EU-countries depend heavily on either nuclear or gas.

It’s also worth noting that the EU taxonomy has more marketing power than power to stop real investments in either of those fields. Even if the proposal is blocked, investors will still be able to think and choose for themselves. The EU taxonomy is something of a Greenpeace guideline to tout solar panels & wind generators, as far as I’m getting it.

Read more about this on euro news.com. 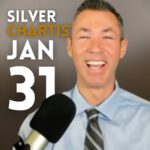 Silver Chartist on Platinum, Uranium, and Silver in 2022
Next Article Graphene Battery Market to See 22.44% CAGR
Leave a comment