Roberta Metsola, President of the European Parliament, and the US ambassador to the EU, Mark Gitenstein, had dinner on Tuesday evening in Brussels, to “discuss further tightening sanctions to Russia”.

Since Russia invaded Ukraine in March, the Russian state-owned nuclear/uranium company Rosatom has been excluded from sections. Although not certain yet, speculations have hit Twitter that uranium might be among the list of commodities to be sanctioned.

Again, as of yet, we don’t know that to be true. 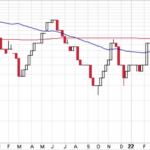