In this article, Vladimir Basov talks about some of the official numbers for uranium production in the US reported by the EIA.

World Nuclear Association reported that nuclear industry in the United States consumed 17,587 tonnes of uranium in 2021 for its fleet of 93 nuclear power reactors. The domestic production, though? About 6 tonnes. What supply deficit, right? 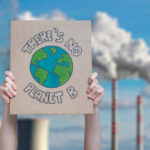 How to Profit From Deranged Climate Goals
Leave a comment